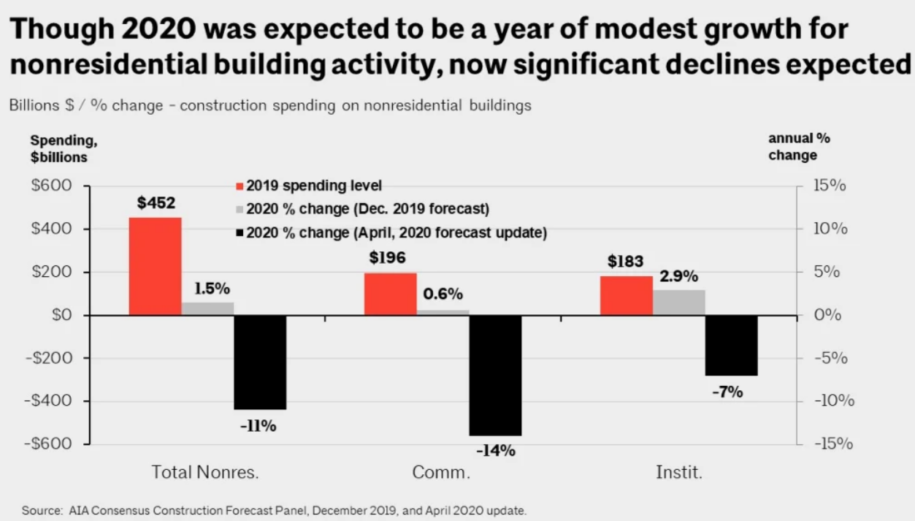 Despite some bright spots of resilience, we have seen impacts to our property construction and design industry in 2020 due to the pandemic and resulting shutdowns.

We speak to many firms around the US and world on a regular basis, and the acute impact to their individual firms has varied from catastrophic in a few of the worst cases, to increases in new contracts and engagements. On average, it seems most have seen some delays, but have not had major financial impacts yet. At the time of this writing, we should expect significant year over year declines of non-residential construction activity.

While we have vaccines and full reopening of markets on the horizon, for many, the 2021 cycle is a major source of uncertainty.

One thing we know is that historically, there is a lag of 12 – 24 months in general construction activity metrics compared to the overall economy. In terms of new commissioning contracts, there may be a lag of around 12 months due to the standard life cycle of a commercial construction project (conception, planning & design, construction).

What this may mean is that even though our favorite pub seems to have a steady crowd on its patio now, the competition for a smaller pool of commissioning opportunities is going to be fierce.

What should we be doing to prepare for this? Waiting until the scarcity arrives is too late to course correct, just like waiting to dig the well until you’re thirsty is a losing strategy.

Federal data shows over 170,000 small business in the United States closed their doors during the Great Recession of 2007-2009. In 2010 HBR reported over 17% of business in general had already “went bankrupt, were acquired, or became private.” But there were exceptions – some companies not only survived but expanded.

Companies that started slashing costs more aggressively than competitors had the LOWEST probability of pulling ahead once the economy turned around. On the flip side, only 26% of companies that invested aggressively did better than rivals.

What companies had the greatest probability of not only surviving, but pulling ahead of the market after recessions? The ones that found a balance between strategic cost saving measures in operational efficiency, and investments in the future.

We firmly believe that adopting the right technology to automate and streamline your business is a simple and effective way to prepare for more competitive, leaner times. Doing more with less is not a luxury, it’s necessary for survival.

BlueRithm makes it easy to get started with a world class, professional-grade commissioning platform. We help our customers move from manual processes (spreadsheets and other static, non-cloud based tools), as well as competing commissioning providers every day. We handle the legwork of converting your workflows and templates into digital templates.

Start a free trial today to see what makes us the preferred commissioning platform in 2020 and beyond.